Mr. Syed Munir Khasru says given the significant influence of the two countries over the entire Asia-Pacific, they could learn from the EU and find ways to come together for greater regional prosperity

From Wang’s perspective, the purpose of his visit was to secure India’s cooperation at upcoming multilateral meetings like the G20, BRICS, and East Asia summits, while also discussing trade and investment, visas and tourism, and cultural and academic exchanges.

Contentious issues did come up and Swaraj reiterated India’s opposition to the China-Pakistan Economic Corridor, a US$46 billion project to transport goods from China’s western regions through the Pakistani port of Gwadar.

Since China blocked India’s entry to the NSG, the fallout has continued. Last month, India deployed 100 tanks to its border with China and then refused to extend the visas of three Chinese journalists who reportedly made unauthorised visits to Tibetan refugee camps. New Delhi has also stated its willingness to help other Asian countries with rights claims in the South China Sea, and Indian navy ships took part in joint military exercises with the Malaysian navy.

New Delhi also sanctioned the deployment of additional supersonic missiles in the Eastern sector, to ramp up capabilities along the Chinese border. During Modi’s upcoming visit to Vietnam, he is expected to offer a range of military equipment and on August 10, Hanoi affirmed that India can drill for oil in the South China Sea, despite Beijing’s threats. 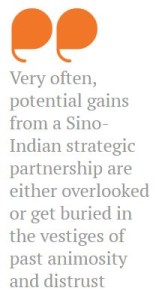 On the economic front, India’s exports to China dropped 16.7 per cent in the first seven months of the year, and New Delhi’s anti-dumping duty on Chinese hot-rolled steel products reflects the continued downward trend in Sino-Indian trade ties.

Since fighting a war in 1962 over a border conflict, China and India have clashed on many issues. Although over time, the rising powers have healed the wounds to grow into major trading partners, the agenda of strengthening connectivity and strategic cooperation remains largely shelved and the NSG affair has certainly not helped. If India’s membership were granted, it would irk Pakistan, considering its demand for access to the group through China.

China’s stance on India also relates to security concerns, centred on the evolving dynamics of New Delhi’s relations with the US and Japan. Informal alliances such as that between Japan and India are meant to balance the growing Chinese influence in the Asia-Pacific.

In parallel, India-Japan-US trilateral dialogue has emerged from Japan’s fear of a rising China, particularly a concern over the battle for trade advantage in East Asia, and South China Sea disputes.

On the Chinese front, concern lies in possible Indian support for Japan and littoral Asean members’ cause, backed by the US military scouting in the region. If these were the only pieces of the continental puzzle, a solution could be found in re-evaluating the parameters of the new regional order by sorting out territorial conflicts.

However, the repercussions of Indo-China relations inflict collateral damage far beyond the two countries as, collectively, they have significant influence on the economic, diplomatic, strategic and military spheres of the Asia-Pacific. All areas would benefit greatly from better Sino-Indian relations. For example, as new members of the Shanghai Cooperation Organisation, India and Pakistan could gain from cooperation with Central Asian countries. For India, it opens a new gateway to the massive energy fields. However, the intricacies of relations between China, India and Pakistan may prevent uninhibited cooperation within the organisation.

Very often, potential gains from a Sino-Indian strategic partnership are either overlooked or get buried in the vestiges of past animosity and distrust.

The European Union is a pertinent example of former enemies (Germany and France) overcoming historical hostilities and playing a leading role in the formation of a union which is now benefiting the whole region.

With potential trade partnerships among Asian countries, the Chinese-led “One Belt, One Road” initiative could enable greater regional integration, boosting collective gross domestic product. The Maritime Silk Road could be funded by the Asian Infrastructure Investment Bank, with India potentially the second-biggest contributor. India also has a 20 per cent capital share in the new BRICS bank. The Bangladesh-China-India-Myanmar corridor initiative, meanwhile, awaits Sino-Indian cooperation to move ahead.

Liu Zongyi, of the Shanghai Institutes for International Studies, is among analysts who believe that geoeconomics rather than geopolitics should rule India-China ties. The reality is both issues are so intertwined that to derive economic and strategic benefits from bilateral and mega-regional cooperation, China and India need to rise to the occasion.

They must find ways to come together to lead Asia towards greater connectivity, increased trade and economic development. The need of the hour is pragmatism and cooperation, not negativism and obstruction.

Big neighbours should be great neighbours before expecting others to follow suit.

The writer, Mr. Syed Munir Khasru is Chairman of a Bangladesh based international think tank – the Institute for Policy, Advocacy, and Governance (IPAG).

You are in: Home / Resources / Commentary / Why ‘love thy neighbour’ is still great advice for China and India