The Myth of Carbon Pricing

Abstract: Many environmental scholars and activists have challenged the efficacy of Carbon pricing – the taken elixir of climate change. This blog explores the avenues to complement the efficacy through needed fundamental changes and policy interventions.

“Climate change is perhaps the gravest calamity our species has ever encountered. It makes genocide and ethnic cleansing look like sideshows at the circus of human suffering.”

The essence of climate change dilemma is freeloading: carbon dioxide (CO2) inflicts great damage across the world, but the emitting countries shoulder only a marginal portion of the costs incurred. As a result, emission of greenhouse gases (GHG) in 2012 has increased to 149% compared to 1990’s levels, when the Kyoto Protocol envisioned to decrease the carbon emission at least by 5% within 2012. To offset the carbon emission, Enron and Goldman Sachs developed a pricing mechanism under a carbon trading market. Almost 40 countries and more than 20 cities around the world are already using or planning to adopt this carbon pricing mechanism.

While in theory, carbon pricing makes carbon more expensive to produce through tax and Cap & Trade mechanism, how effective is it in practice in reducing CO2 emission to the targeted level? 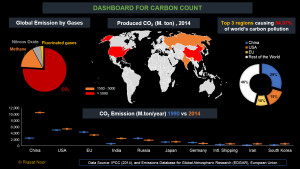 While carbon tax is the levy imposed on corporate polluters to buy fossil fuels, i.e., coal or natural gas; these companies in reality pass the cost onto their clients and customers. Under the Cap & Trade pricing, obliging countries and corporations have a ceiling for carbon generation. However, the industrialized countries can trade off the excessive amount with countries with lesser emissions. This process is rather making heavy industries, i.e., electricity generation, cement, fertilizer, iron & steel and so forth delay investing in clean energy by buying cheap carbon footprint from somebody else. Alternatively, these corporations can also cover their emission by investing in CO2 reducing measures in factories (i.e., a tree plantation CSR agency or a windmill firm) located in the developing countries. These measures amount to relocating the CO2 in the same planet relatively easily and pretending to still achieve the climate action goals! The EU carbon trading system, upon lots of consultation with industries, is sanctioning more carbon rights to the participating industries than their current pollution levels. Eventually, the Cap & Trade system is meeting half the protocol of the carbon reduction strategy. This way, if the system is not essentially reducing CO2 as required, it is not addressing the problem (Larry Lohmann).

The fundamental and structural changes required to shift from fossil fuel to clean energy need political consensus, business reorientation and certainly more expense down the line. If we truly intend to avoid the apocalyptic turnout of climate change and repair the damaged earth, this is the minimum bounty we have to pay. Meanwhile, carbon pricing cannot be the silver bullet to the existing climate change action. The Bali Conference, COP21 (Paris Agreement) and the EU Emissions Trading System (EU ETS) also reiterate the urgency by emphasizing on rudimentary incentives such as subsidy shifting from fossil fuels to clean energies, R&D in alternative energies, and synchronized agenda for different political movements. Moreover, transparency and reciprocity within intergovernmental dialogues should also be ensured before climate change becomes another issue of political struggle and ends with hollow victory statements.

Ackerman, F. (2009). Can We Afford the Future?: The Economics of a Warming World (The New Economics). Zed Books.

You are in: Home / Resources / Blogs / The Myth of Carbon Pricing