South needs to COLD for cooperation to get warmer 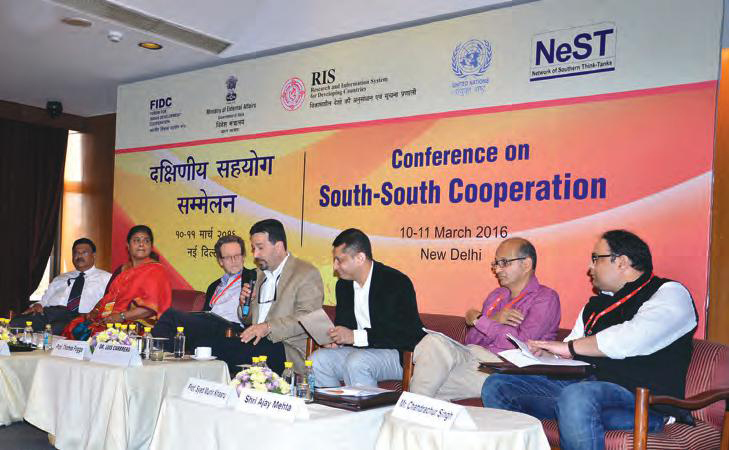 The international conference on ‘South-South Cooperation (SSC)’, organized on March 10-11 by the Research and Information System for Developing Countries (RIS), one of the well respected Indian think tanks, took place at a time when the world is witnessing major paradigm shift in ‘global center of gravity from North to South’; also known as the emergence of the Global South. The conference became a convergent point for major stakeholders including senior policymakers, think tanks, development partners, business community & media to discuss the way for strengthening Southern cooperation as well as finding complementarities with ‘North-South Cooperation (NSC)’ or ‘Triangular Development Cooperation’.

SSC’s guiding principle has been respect for national sovereignty and reflecting the reality and common interests of the developing countries. It is not just about financial assistance per se, and is not regulated by the existing rules and frameworks used to gauge traditional North-South development assistance. SSC is horizontal evolving towards a relationship among emerging economies and not the traditional donor-recipient relations like the NSC. While the principles of NSC have been criticized as being donor driven, implying an unequal partnership, SSC is inclusive and embraces roles of the civil society and private sector and is more than just a government driven initiative.

A number of ambitious ideas & plans of actions have been laid out for SSC. Despite promising potential, one of the challenges for developing countries remains how to effectively implement such plans. There is a need for a framework for better organization of information that would provide the basis for better decision making, effective strategies, and establishment of seamless procedures & credible institutions. Otherwise, the very notion of SSC becomes rather abstract and risks being perceived as a series of discreet and unrelated activities without having a common thread linking them together. The “COLD (Connect, Organize, Learn, and Develop)” model proposes specific value additive measures to inject momentum to the SSC as opposed to a list of wishful thinking. COLD offers a platform for linking the plans of action and was referred to in the valedictory session of the conference for its pragmatism and preciosity. Here is COLD in a nutshell.

Connect: Digitalization is driving connectivity, shifting the locus of economic power, catalyzing globalization and demographic change. Comparing internet user rate in Southern countries such as China (49.3%), India (18%) and Brazil (18.5%) to Northern countries such as US (87.4%) UK (91.6%), and Germany (86.2%), the potential for South-South connectivity that can brought about by ICT is quite evident. With access to the internet, people are better informed and the middle and lower middle class are becoming more allured to traveling. This has made Asia one of the most attractive budget destinations, with 15-day backpacking expenses averaging only $250 to $350, compared to that of Europe at $720 to $1,100. China is one of the top ten most visited countries, with over 55 million international visitors in 2014. South-South tourism offers attractive options at an affordable price while creating employment in a sector which absorbs around 8% of global jobs, an ideal win-win situation. Hence, internet penetration and tourism promotion are among the low hanging fruits that can propel people to people contact in the South.

Organize and Learn: A systematic approach is needed to leverage the diverse cooperation modalities under the existing framework for advancing development goals of the South. A good starting point can be creation of a South-South Knowledge Platform (SSKP) with a secretariat of say around 15-20 people and contributing member countries signing in. It is paradoxical that while a South Center exists, it is in Geneva, in the North, than perhaps being in Beijing or Delhi or Pretoria.  The common experiences of the Global South are derived from sources such as colonial history, geographic & demographic characteristics and socio-economic conditions. Countries can come together to learn from the best practices and institutions in the South like the Poverty Reduction Center in China, renewable energy success of India, microcredit & women’s empowerment in rural Bangladesh. SSKP can provide the platform for holding events and disseminating information and knowledge. These common experiences provide advantage to SSC over NSC to adopt solutions compatible to the unique ground realities of the South.

Develop: While the South holds common historical grounds for cooperation, it is yet to leave behind the historical legacy of apprehension & hesitation. Even in the conference concept note, there is mention of The New Development (BRICS) Bank, but there is no mention of the Chinese led Asian Infrastructure Investment Bank (AIIB) which India also has joined and China and India are major Southern countries. Such mindset is counterproductive and in some instances result in duplication and wastage of resource. For example, interface and coordination is missing between the Chinese led One Belt One Road (OBOR) initiative and the India led Bangladesh, Bhutan, India, Nepal (BBIN) motor vehicle agreement. To develop together, the South needs a more pragmatic mechanism so that initiatives, regional or international, are better coordinated making optimum utilization of resources and benefitting all its citizenry. China and India can lead the way by coming together on common development issues as opposed to being hostages to vestiges of distrust still out there because of a distant past that has very little relevance for either the present or the future of the two countries. The shift from North-South aid to South-South Cooperation has opened up promising opportunities for development. COLD provides a strategic framework and food for thoughts to the Southern stakeholders to come together in the common pursuit of economic development and social stability.  The sooner South walks the talk, the better it is for the teeming millions aspiring for a better life.

Syed Munir Khasru is the Chairman of the international think tank, The Institute for Policy, Advocacy, and Governance (IPAG).  e-mail: munir.khasru@ipag.org

You are in: Home / Resources / Blogs / South needs to COLD for cooperation to get warmer