IPAG becomes member of the Migration Task Force for the G20

On November 30, 2016, the Institute for Policy, Advocacy, and Governance (IPAG) has been included as a member of the Task Force on Forced Migration which was chosen from the leading think tanks of the G20 countries which represents the twenty most powerful economies of the world and include all the permanent members of the UN Security Council. The forum of the think tanks from the G20 is known as T20 and the T20 meeting took place from Nov 30-Dec 2, 2016 in Berlin, Germany which is the current President of the G20. 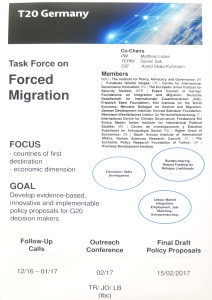 The Task Force of Forced Migration is co-chaired by two leading think tanks from Germany and Turkey i.e. Kiel Institute for the World Economy, Germany, and Economic Policy Research Foundation of Turkey (TEPAV), along with German Development Partner GIZ. Other than IPAG, rest of the think tanks are from Germany, Canada, EU, UK, Brazil, Italy, Mexico, Russia, South Africa, and Turkey.  The task force will focus on countries of first destination for the migrants and on the socio- economic dimension of forced migration. The goal is to develop evidence-based and implementable policy proposals for G20 decision makers.

Mr. Syed Munir Khasru, Chairman, IPAG made a presentation titled “Migration: The World Today, Challenges, and The Way Forward”. He discussed the global perspective on migration & G20 response to the crisis. Particularly, he highlighted the challenges faced by a developing & asylum country like Bangladesh in light of the escalating situation with the Rohingyas of Myanmar. Mr. Khasru presented the situational assessment of the Rohingya population in Bangladesh and discussed ways for collaboration in the international community led by the G20 to support the resettlement initiatives for the refugees around the globe. The Task Force will put forward recommendations for the G20 leadership during the G20 Summit to be held in Hamburg in July 2017.

You are in: Home / Recent Activities / IPAG becomes member of the Migration Task Force for the G20