Impact of Mega-Regional Trade Agreements in the Asia Pacific 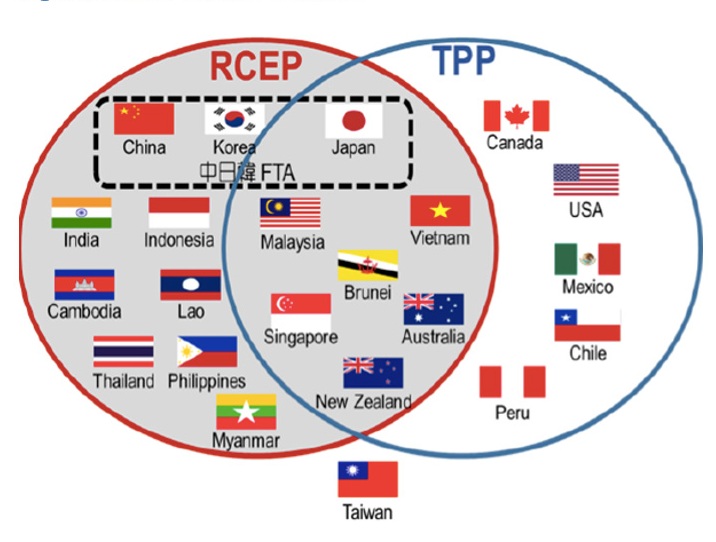 The Asian Economy invigorated shifting of the global growth nexus. To tap the potentials of this growing market, businesses, investors and policy makers have been emphasizing greater economic cooperation among countries. Since 2013, the number of trade blocs, bilateral & multilateral trade agreements and regional economic cooperation initiatives grew exponentially. The overall result was a “noodle bowl effect” in the Asia-Pacific zone. As alternative integration initiatives compete for support in the Asia Pacific – such as the Trans-Pacific Partnership (TPP) and the Regional Comprehensive Economic Partnership (RCEP), it has become increasingly important to assess the impact of these economic partnership agreements (EPAs) to support evidence-based decision making of policy makers to derive the maximum benefits of these regional trade blocs.

The three major potential mega-regional trade blocs in the Asia-Pacific are the Trans-Pacific Partnership (TPP), the Regional Comprehensive Economic Partnership (RCEP) and the Free Trade Area of the Asia Pacific (FTAAP). The TPP and RCEP are often perceived as rival trading blocs led by the United States and China respectively, while the FTAAP remains a highly ambitious vision of the APEC leaders.

The TPP is targeted to ensure high labor standards, generating competition in state-owned enterprises with private enterprises, which is a comparatively a more ambitious initiative aiming at behind-the-border regulatory harmonization, while the RCEP is more aligned towards developing country priorities, like improving trade and investment climate with special focus on integrating regional production networks. The FTAAP, on the other hand, is aimed at minimizing the “noodle bowl” effect of the multiple regional trade blocs having overlapping areas of intervention and inclusively addressing the “next generation” trade and investment issues relating to intellectual property rights, country of origin labelling issues, trade in value added terms, blue economy, green growth, etc.

In terms of the impact on the composition of world exports, the RCEP seems to generate greater success than the TPP.  The projected impact of TPP on trade in primary products is negligible, but with a boost of 0.8% and 1.1% on trade in manufactures and services respectively. The RCEP, on the other hand, is projected to increase trade in primary products by 0.4%, manufactures by 2.3% and services by 2.1% from the base line of 2025 (Petri et al, 2011, Table 9 Effects on the composition of world exports). The US is not part of the RCEP while China and India are excluded from the TPP – which reinforces the perception of the two platforms being exclusive economic blocs. However, both agreements are open to accession of new members (ADBI, 2014).

According to the State of the Region report, the scale of integration and membership does seem to have a large impact on the outcome of the trade blocs. The FTAAP with 17 members could triple global benefits from $223.4 billion to $1,908.0 billion in 2025. The benefits would grow further to $2,358.5 billion if Hong Kong (China), Chinese Taipei, Papua New Guinea and Russia were added based on APEC membership, and still larger benefits could be achieved if India, Cambodia, Laos, and Myanmar were added to form FTAAP-25 (PECC, 2014). It is easier for developing countries which are ready for some degree of liberalization to join the RCEP, while economies intending to undertake deeper liberalization can aim to be TPP members. Eventually, the two FTAs could converge to form a holistic agreement across APEC, like the FTAAP, which can create large income gains for its members.

However, such membership of mega regional trade blocs require significant cost benefit analysis before policy decisions are made. It is least expected by any country to have membership of ineffective pluri-lateral platforms that add on to the so called noodle bowl effect rather than deriving tangible development in the economic climate. In this regard, it is necessary to assess the overall impact of these initiatives individually for the economies involved as well as for the aggregate region. As the negotiations of the mega-regional trade blocs move forward, the academic sector/knowledge industry can play an irreplaceable role in supporting the negotiations with relevant study, research and policy advocacy.

You are in: Home / Resources / Blogs / Impact of Mega-Regional Trade Agreements in the Asia Pacific