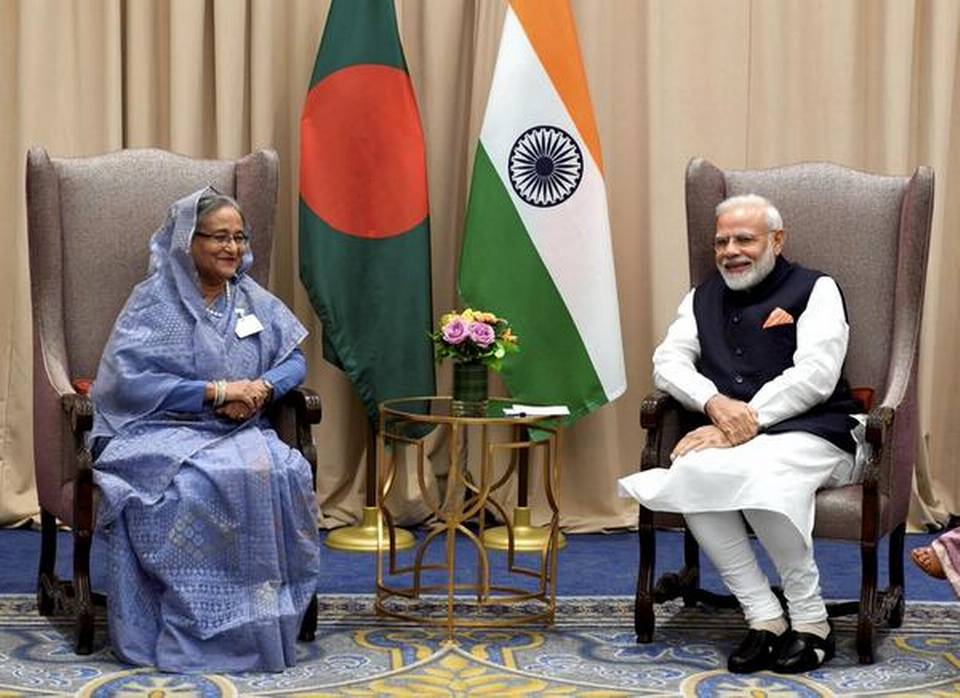 There is scope for India-Bangladesh ties to move to the next level, based on cooperation, coordination and consolidation

Bangladesh Prime Minister Sheikh Hasina will make her first official visit to India from October 3-6, post the general elections in Bangladesh (December 2018) and India (May 2019). She will address the World Economic Forum’s India Economic Summit followed by the bilateral visit. India and Bangladesh today enjoy one of the best periods of their relationship, with positive development in the areas of diplomatic, political, economic and security relations.

Despite gains, the issues

The current Bangladesh government has uprooted security threats and acts of insurgency against India and today, the India-Bangladesh border is one of India’s most secured. The signing of the Land Boundary Agreement in 2015 was a milestone, where the two neighbours amicably resolved a long-outstanding issue.

Bilateral trade was a little over $9 billion in FY 2017-18 and Bangladeshi exports increased by 42.91%, reaching $1.25 billion in FY 2018-2019. Removal of non-tariff barriers will help Bangladeshi exports such as harmonising the standards for goods accepted by India. In 2018, in addition to the 660 MW of power imported by Bangladesh, Indian export of electricity increased by another 500 MW. A 1,600 MW power station with a dedicated transmission system is being developed to boost power trade.

Land routes have gained popularity over air travel, and are preferred by 85.6% of Bangladeshis visiting India. Train services on the Dhaka-Kolkata and Kolkata-Khulna are doing well, while a third, on the Agartala-Akhaura route, is under construction. Five additional bus services were introduced in 2018; this March, the first ever Dhaka-Kolkata cruise ship was launched. Bangladeshi tourists accounted for 21.6% of the total percentage of tourists visiting India in 2018 (83.7% tourists and 10.28% medical patients). Today, Bangladesh contributes 50% of India’s health tourism revenue.

A few major outstanding issues still remain, with the most pressing being the Teesta Water Sharing Agreement. West Bengal Chief Minister Mamata Banerjee’s refusal to endorse water-sharing terms agreed upon by Prime Minister Modi in 2015 has resulted in the current impasse. A lack of water has affected 100,000 hectares of land, with contamination affecting the soil; the increased cost of pesticides and irrigation has made farming less profitable. The National Register of Citizens (NRC) has left out 1.9 million Assamese from the list with a group labelled as “illegal immigrants from Bangladesh” living in Assam post-1971. Bangladesh remains firm in its stance that no migrants travelled to Assam illegally during the 1971 war of independence and that the controversial NRC risks hurting relations.

Border killings have decreased. India’s Border Security Force (BSF) claims that most of the firing is in self-defence in tackling cattle trafficking. However, since the ban by India on cattle export, cattle trade has fallen from 23 lakh in 2013 to 75,000 till the end of May this year — which makes the argument unconvincing. International rules of engagement entail that military action must be “proportional to provocation”, which makes such killings a serious violation of human rights. It must not be forgotten that in 2018, the BSF DG had said: “Relations between India and Bangladesh and the two border guarding forces are at their best right now.”

Since 2010, India has approved three lines of credit to Bangladesh of $7.362 billion to finance development projects. Due to bureaucratic red tape, just $442 million has been disbursed till December 2018. While Bangladesh has been slow in implementation, India’s requirement of the disbursement process to be approved by India’s Exim Bank has not helped either. During Sheikh Hasina’s visit to Delhi in 2017, two defence pacts were signed; in 2018, India extended a credit line of $500 million to purchase armaments; two memoranda of understanding were also signed for cooperation between the naval forces.

The Rohingya issue and India’s remarks in 2017 on the issue have been upsetting for Bangladesh which has been facing the challenge of providing shelter to more than a million Rohingya refugees fleeing persecution by one of the world’s most brutal military regimes. The recent visit to Dhaka by India’s External Affairs Minister S. Jaishankar (August 19-21), saw a marked departure in India’s position; he had said then: “We agreed that safe, speedy and sustainable return of displaced persons (Rohingyas) is in the national interest of all three countries – Bangladesh, Myanmar, and India.” However, it is China that is mediating when, given its geographical proximity, it is India which is ideally positioned to play a positive role in regional leadership.

India-Bangladesh relations have matured in the last decade with development in many areas of cooperation. In a neighbourhood where distrust and cynicism prevail over friendship and hope, the relationship between the two countries has given hope for optimism. But the sooner existing challenges are resolved, the better it is. On the sidelines of the 74th UN General Assembly late last month, Mr. Modi assured Sheikh Hasina that she would not need to worry about the NRC and water-sharing as bilateral relations are very good. It is now time to walk the talk.

The shared colonial legacy, history and socio-cultural bonds demand that the political leadership of the two countries inject momentum into India-Bangladesh relations. Sheikh Hasina’s trip to India will hopefully help relations graduate to the next level of strengthening the three Cs: cooperation, coordination, and consolidation.

Syed Munir Khasru is Chairman of the international think tank, The Institute for Policy, Advocacy, and Governance (IPAG)

You are in: Home / Resources / Commentary / Furthering this neighbourhood friendship