China succeeded in deepening ties with Singapore last month, signing 14 new deals at an annual bilateral cooperation meeting held on December 29. Beijing has been active in Southeast Asia since the 1990s, becoming a dialogue partner of the Association of Southeast Asian Nations (Asean) in 1996. In November 2020, 10 Asean members signed the Chinese-led Regional Comprehensive Economic Partnership (RCEP), the world’s largest free trade agreement involving several major powers, but with the notable absence of the US. Certainly, the US remains a central geopolitical power, with allies in the Middle East, Asia, Europe and the Pacific. The absence of large military powers in Southeast Asia has also helped the US gain a geopolitical footing in the region.

On the other hand, China has unswervingly bolstered production, trade and investments both in Southeast Asia and globally, evolving into a geoeconomic power by strengthening relations through economic partnerships and trade relations. Barack Obama’s “Pivot to Asia”, rather than adopting an economic focus, relied more on a robust military approach aimed at containing China. Then came Donald Trump’s “America first” policy which saw the US exit the Trans-Pacific Partnership, damaging its political and economic relations with Southeast Asia.

US President Joe Biden now faces an uphill struggle to correct course. Although high-level engagement has been initiated, a lot more must be done to regain the confidence of the region in the consistency and reliability of US policies. America’s firm stance against autocracies in Southeast Asia has also indirectly benefited China, which remains unbothered by humanitarian issues. The disputed waters of the South China Sea are another issue at play. China remains a security concern for many Asean member nations, but given the huge direct investment and development assistance flowing in from China, they are unlikely to position themselves against Beijing.

Rather, analysts have hinted at a potential comprehensive strategic partnership between Asean and China – including countries contesting Beijing’s aggressive claims in the South China Sea – that could further boost investment, trade and even military ties, while weakening US influence in the region. Understanding that economic security created through trade lasts longer than when done through military superiority, China has deftly managed the relationship with Asean by strengthening economic ties with many traditional US allies.

Despite tensions with Vietnam, the country’s new metro system in Hanoi is Chinese made. Indonesia, considered an important ally by Washington, has also embraced China of late, propelled by the latter’s pandemic diplomacy. Last year, the two signed an agreement to promote the use of their respective currencies in trade deals, curbing dependence on the US dollar.

Australia, a historically close US ally with security partnerships like Aukus, has also ratified the RCEP. Even though Australia has banned Chinese telecommunication firms from supplying 5G technology, and Australian exports to China are facing entry-related obstructions, Chinese investment has increased over the years to make China Australia’s largest trading partner, with US$261 billion flowing annually between the two. China has made huge strides to become a major player in the international market. Free trade agreements such as the RCEP have helped it build inroads in the Indo-Pacific region. While the US is engaged in diplomacy, China is playing its cards with infrastructure investment deals. 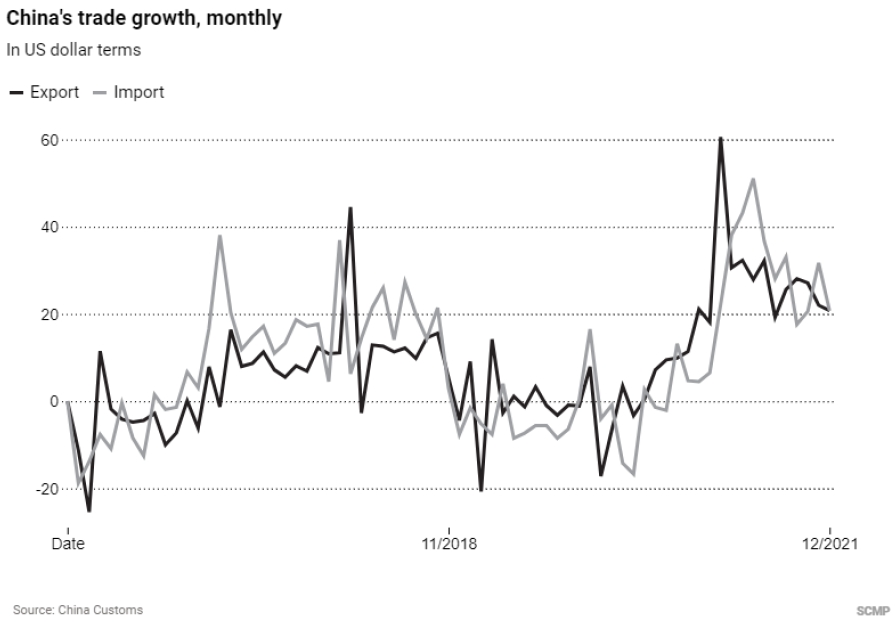 Asean became China’s top trading partner in 2020, beating the European Union. Asean attracts Chinese foreign direct investment in many sectors, from agriculture and manufacturing to the digital and green economies. Investment between Asean and China now exceeds US$310 billion. Total trade in 2020 rose to US$685.28 billion whereas, for US-Asean trade, the figure stood at US$362.2 billion. Even when it comes to the Quad, which comprises the US, Japan, Australia, and India, China has a strong trade relationship with all members bar the US. Japan’s exports to China stood at US$141.4 billion in 2020, roughly one-fifth of its total exports, surpassing the US. China also briefly overtook the US in 2020 to become India’s biggest trading partner, supplying it with heavy machinery, telecoms equipment and home appliances – although the US managed to regain its top position last year amid a slowdown in China-India bilateral trade growth. US-China trade relations, meanwhile, are increasingly under strain. Washington continues to impose tariffs on Chinese imports, thus dismantling China’s position as the US’ top trading partner.

Beijing’s diplomatic strategy cannot be viewed in isolation from its economic policy. China has attracted countries in the Indo-Pacific through large infrastructure investments deals, especially under its Belt and Road Initiative, development aid and foreign investment. Economic blocs such as the RCEP will bring more partners to China, giving the US tough competition. China has not engaged in traditional soft/hard diplomacy but has instead adopted a strategy to boost geoeconomic relations, while following a policy of domestic non-interference. The US is still playing catch-up as it works on a comprehensive Indo-Pacific framework to strengthen cooperation around trade and the digital economy, resilient supply chains, decarbonisation, infrastructure, and other areas of shared interest. With continued domestic divisions in the US, which have frequently spilled over into trade and foreign policy, it will take more than diplomatic engagement and words of assurances for the US to match an adversary which has neither any vested-interest group to cater to at home nor any uncertainty over the continuity of its political leadership or policy consistency. Professor Syed Munir Khasru is chairman of the international think tank, The Institute for Policy, Advocacy, and Governance (IPAG) with a presence in Dhaka, Delhi, Melbourne, Vienna and Dubai

You are in: Home / Resources / China’s trade tactics are winning out over US diplomacy and military might in Southeast Asia