Visit of IFS Delegation to IPAG 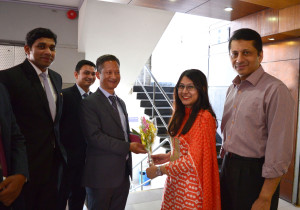 Officer Trainees from the latest batch of the Indian Foreign Service (IFS) came for an interactive discussion session at the IPAG office on March 15, 2017. Twenty young diplomats visited Bangladesh for a familiarization tour on March 2017. As a part of their orientation, the Indian High Commission in Bangladesh wanted to organize an interaction session with a prominent think-tank in Bangladesh.

IPAG researchers made presentations on regionalism in Asia Pacific and short audio-visuals on Geopolitics and Indo-Bangla relations were shown to the trainee officers. This was followed by vibrant discourse, interface, and exchange of opinions and ideas between the IFS delegation and IPAG team.

You are in: Home / Recent Activities / Visit of IFS Delegation to IPAG