Letter from a possible climate-change migrant

As you continue efforts in Paris to produce a meaningful deal over climate change, the future of vulnerable countries hangs in the balance. Against such a background, this letter comes from a potential climate-change migrant seeking shelter in other countries in a future that may not be as distant as it seems.

As weather whiplashes make places unliveable, people like us are faced with stark choices of relocation or death. Being a citizen of Bangladesh, a low-lying deltaic country that ranks among the most vulnerable to climate change, I can see my shadow in the long queues of desperate Syrian refugees flooding the borders of Europe.

Last year saw the highest level of greenhouse gas emissions and the largest number of refugees in history, with around half being children. The first half of this year has been the hottest on record, with unusual heatwaves killing over 1,200 in Pakistan and more than 2,000 in India. Since 2008, 161 countries have suffered from environmental disasters due to climate change causing mass displacement of people. The average number of people displaced from 2008 to 2013 is 27 million a year, but that could rise to 200 million once the full impact is felt.

The World Bank reports that climate change will cause extreme and frequent heatwaves and droughts, particularly in the Middle East and North Africa, intensifying shortage of water, crop failure, food crisis and famine. The war and mass emigration from Syria are partly due to climate change. The 2007 to 2010 drought and crop failure led to the displacement of farmers, fuelling the conflict and uprising in Syria. If this is the scenario after the global temperature has risen only a fraction of a degree C, then the consequences of a 2 to 4 deg C temperature rise are fairly predictable. 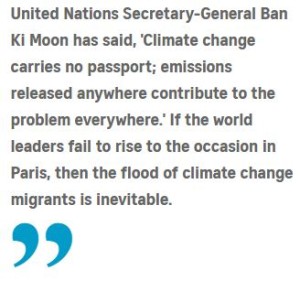 Low-lying deltaic regions and coastal countries like Bangladesh are most vulnerable. According to a recent estimate, 20 million people from Bangladesh will be displaced and 17 per cent of the land submerged in the coming decades. The International Organisation for Migration estimates that 500,000 people move to Dhaka every year. Seventy per cent of the slum dwellers have moved due to environmental reasons such as salinisation and destruction of livelihoods or increasing frequency and scale of natural disasters.

About 40 million people live on the coasts of Bangladesh and populated islands like Kutubdia face the threat of disappearance within five decades.

Anthropogenic climate change would dwarf the exodus caused by genocide in the 1971 Bangladesh liberation war, when 10 million refugees left their homeland in search of safety. Small island-nation Kiribati’s President Anote Tong made a poignant observation on the possibility of the drowning of his homeland and his people taking shelter in Fiji.

The prospect of climate change-induced genocide, a term that refers to the wiping out of lives and livelihoods of whole populations, looms large on the horizon.

Paris holds good promises that can be realised only if all sides deliver on their professed good intentions. Half-hearted measures or an incremental approach will not do and the deal should have some teeth. Unless the COP 21 negotiations bar global warming at 1.5 to 2 deg C, the planet’s survival would be at stake and the world should start getting prepared for the ultimate migrant crisis, that is, the climate-change migrant crisis.

If world leaders fail to rise to the occasion in Paris, then the flood of climate-change migrants is inevitable. When the time comes, no one should blame migrants from countries like Bangladesh when we come knocking at the door looking for food and shelter.

The time to act is now, to prevent a catastrophe which will make the current migrant crisis look like a tea party. Time and tide wait for none, nor does the warming air, melting ice, rising sea, drifting land mass and, ultimately, shifting people. For those opting for the wait-and-see approach, by the time they realise and act, we may very well be on our way to crossing their borders. I would consider this open letter as my visa to one of those countries whose leaders did nothing when it mattered as my family and I lost all that we had – home, country and hope.

You are in: Home / Resources / Commentary / Letter from a possible climate-change migrant