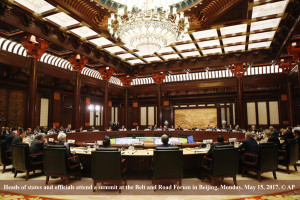 When Chinese President Xi Jinping delivered his keynote speech on May 14 to 28 heads of states, leaders of international organizations and delegations from 130 nations at the opening ceremony of the China’s Belt and Road Forum in Beijing, he urged his audience to achieve results through greater openness and cooperation. Xi cautioned that countries should respect each other’s interests and argued that the Belt and Road Initiative would promote fruitful exchanges and coexistence.

The Belt and Road Initiative, announced by Xi in 2013, aims to connect nearly 70 economies through a network of roads, railways, bridges, pipelines and ports. Also known as the “One Belt, One Road” and “New Silk Road” project, the initiative is 12 times bigger in scale than America’s postwar Marshall Plan to rebuild Western Europe and it will require the significant participation of all stakeholder countries.

The main objective of the summit in Beijing was to solicit the endorsement of global leaders for the China-led infrastructure projects under the BRI vision. Most leaders of the 10-member Association of Southeast Asian Nations attended the summit, but they remain divided on how to respond to Chinese expansion in the South China Sea. Now that the U.S. has abandoned the ambitious Trans-Pacific Partnership trade agreement and U.S. President Donald Trump has distanced himself from former President Barack Obama’s “pivot to Asia,” ASEAN nations are looking toward Chinese leadership in regional investment to expand free trade despite some reservations.

The countries targeted for BRI projects cover a range of economies, demographics and governing systems. For the project to reach maturity, China needs to convince stakeholders how BRI projects will produce net economic benefits without accompanying political risks. It is in this area, where Chinese leadership seems to be struggling.

The proposed land and sea linkages crisscrossing most of South, Southeast and Central Asia have already revealed geopolitical sensitivities. India, despite lacking infrastructure investment, has voiced concern about joining the BRI because the China Pakistan Economic Corridor touches on border and sovereignty issues, a point recently made by Indian Finance Minister Arun Jaitley.

Similar concerns are likely in many of the countries that China has targeted for BRI projects. China must display the diplomatic skills needed to effectively address potential complex geopolitical issues. India, one of the fastest growing economies, represents an important conduit for Maritime Silk Road in the Indian Ocean region and the absence of an Indian delegation at the summit revealed deep-seated Indian suspicions about the project and China’s geopolitical ambitions.

The roads, bridges and ports envisioned by BRI would connect Central Asia to Europe and East Africa and cover 65% of the world’s population, one-third of global gross domestic product and about a quarter of global trade in goods and services. The project will hugely benefit China and help reduce its dependence on its port cities and overburdened sea routes. Developing Asian economies hungry for infrastructure view the BRI as a means to boost their international trade. At the summit, U.N. Secretary-General António Guterres compared the BRI to the U.N. Sustainable Development Goals since both initiatives share a vision for global development.

China has lined up a consortium of banks and institutional funds, including the China-led Asian Infrastructure Investment Bank, the Silk Road Fund and the New Development Bank, to provide $240 billion in financing. But it is estimated that $6 trillion will be needed to construct all the planned projects over the next 15 years and China alone cannot fund them. To undertake this monumental task, robust support from leading economies and private investors in the West is required. For governments and investors to invest in risky projects in volatile regions over the long term will require stronger guarantees and confidence building measures on the part of China.

Some countries targeted for BRI projects have border issues with China, while others are U.S. allies that do not want to be seen as “joining the Chinese camp.” Many European economies will have security issues when it comes to BRI projects and may fear their markets being flooded with Chinese products.

The success of the BRI depends on China creating a more inclusive and interactive mechanism to allay these concerns. China cannot ignore the voices of participatory democracies and expect them to follow the Chinese model of economic development. Observers remain uncertain whether China has the means to develop robust institutions to manage such challenges. China needs to address concerns about critical issues like sovereignty, governance and transparency to ensure the progress of the BRI.

Chinese megaprojects overseas have had a mixed record. For example, the China-financed rail project running from Addis Ababa, Ethiopia to the port of Djibouti has cut transportation time from three days to 12 hours and has opened up landlocked Ethiopia to the sea. It will also soon link Ethiopia to neighboring Kenya and Sudan.

On the other hand, Chinese investments in Latin America, amounting to almost $30 billion, have only focused on been short-term resource exploration in mining and agriculture. An analysis by the Inter-American Dialogue shows that in 2016, 92% of China’s loans to Latin America went to Ecuador, Venezuela and Brazil, nations that are facing serious economic problems. As a result, Chinese investment has fared differently in different regions, a concern BRI advocates will need to address.

By building infrastructure for 65% of the world’s population, China can provide a much-needed global public good whose beneficiaries will mainly be in Asia, Europe and East Africa. If successfully undertaken, BRI will stand as the world’s greatest platform for regional collaboration. As Napoleon said, “China is a sleeping giant. Let her sleep, for when she wakes she will move the world.” The question is whether and how China may move the world — and, equally importantly, whether the world is ready to dance to the tune of Chinese music.

You are in: Home / Resources / Commentary / China needs diplomatic skills to sell Belt and Road Initiative