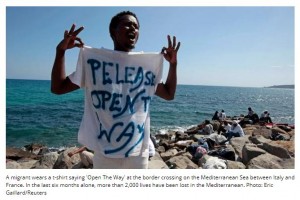 Every day, an average of some 34,000 people are forced to flee natural or manmade disasters. In the last six months alone, more than 2,000 lives have been lost in the Mediterranean; over the last weekend in June, 12,600 migrants arrived in Italy by sea. Financial and political pressures are overwhelming the countries in the Middle East, Africa, and Europe that are on the receiving end of this human wave. Unfortunately, in many cases, help is not on the way.

The scale of forced migration today has revealed troubling flaws in the organisations intended to serve as the last line of defence. Weak mandates, insufficient funding, disorganised structures, and the absence of a global governance system have weakened intergovernmental agencies’ ability to act with authority in the name of the most vulnerable.

As I argued in Germany this week, G20 leaders meeting in Hamburg on July 7-8 have had an opportunity to reshape the migration governance system with proactive protection policies that would enhance people’s trust in international leadership. Although past summits have produced little more than talking points, the prospect for action is better this time, given that the talks have been held in Europe, where the impact of the migration crisis has been deeply felt.

At the moment, an alphabet soup of non-profit and multilateral agencies tackles elements of the challenge. These include independent groups like Refugees International (IR) and Médecins Sans Frontières (MSF). Even the World Trade Organisation (WTO) plays a role in managing economic migration. But at the intergovernmental level, the two most important players—the Office of the United Nations High Commissioner for Refugees (UNHCR), and the International Organisation for Migration (IOM)—are also under the greatest strain.

For the UNHCR, the challenges are systemic. For starters, it lacks broad enforcement powers, and must rely on government cooperation, which is not always guaranteed in conflict zones or forthcoming from neighbouring states. Countries that ratified the 1951 Refugee Convention have never fully adhered to it in practice, which limits the UNHCR’s ability to act. UNHCR interventions fail when countries are uncooperative, as we saw with Haitian and Cuban migrations to the United States in recent decades.

But the UNHCR also suffers from internal shortcomings. Its communication with refugees on the ground is inconsistent. While an increase in UNHCR protection officers would help, it is equally important that the agency get its facts straight. For example, when host countries move to repatriate refugee populations forcibly, without informing the UNHCR, the agency itself looks unreliable, if not incompetent.

The UNHCR, as currently conceived is not the independent, nonpartisan agency it claims to be. Heavily dependent on donors and host governments to launch relief operations, it is beholden to their interests and does not always have the political support it needs to get the job done.

The other major multilateral migration agency, the IOM, assists in the return of migrants, asylum seekers, refugees, and the internally displaced to their place of origin, or to other countries or regions that have agreed to accept them. But, like the UNHCR, governance issues plague the IOM.

In particular, the IOM lacks a mechanism to evaluate whether national governments are using coercion—banned under international law—to repatriate or relocate refugees. Nor does the IOM have the capacity to assess the safety of areas to which refugees are returning.

Millions of people benefit from IOM-sponsored programmes and projects, but prior to joining the UN structure as a “related organisation” in September 2016, the IOM had no formal mandate to protect the rights of migrants. And even as a UN-related entity, the IOM suffers a mismatch between its broad mission and its meagre budget and staff. It has been held to a “zero growth” standard in recent years, even as demand for its programmes has increased. And, because its work is largely project-based, with member states funding specific activities, its role in mitigating refugee crises is largely reliant on individual members’ preferences and priorities.

As key guardians of the world’s refugees, these two organisations must adapt to today’s challenges. Proactive policies on inter-agency coordination and financial burden sharing are essential. Elements of the Refugee Convention, like language on asylum policies, also should be updated to reflect current realities, and both agencies need to develop holistic and consistent policies on refugee advocacy and protection. To this end, the member states of both organisations should support their continued integration within the UN structure, which would give them more tools to influence the causes, not just the effects, of forced displacement.

These are just a few of the governance upgrades that I have recommended for the G20. Both the UNHCR and the IOM could benefit from stronger multilateral support, and the G20 is uniquely poised to offer it. If we cannot end war, famine, corruption, or poverty, then the next best solution is to improve the organisations helping those who flee them.

The writer, Chairman of The Institute for Policy, Advocacy, and Governance (IPAG), an international think tank, led a review of global migration governance for the 2017 G20 summit held in Hamburg, Germany on July 7-8.

(Exclusive to The Daily Star)

You are in: Home / Resources / Commentary / A G20 refugee agenda